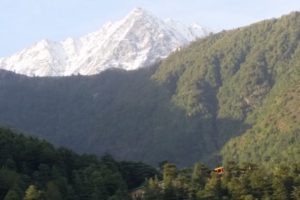 It was very kind of you to conduct the Hungry Ghost Retreat for the second time in Kunphen Center, Dharamsala.

We are immensely grateful for taking your time out to connect with us and show our clients the path to recovery. This week long retreat, consisting of various meditation techniques interspersed with qigong (Mindful Movement) has had a huge effect on our clients.
Our clients reported that they have never experienced such calm at the end of the Retreat. Almost all of them reported saying that they could sense some honesty and a sense of well-being prevailing inside them as the Retreat progressed day by day. No wonder, one of the clients practically handed over a gram of brown sugar adulterated form of Heroin before the statue of Lord Buddha and the image of H.H. the Dalai Lama taking the vow not to use again in life forever.
The person who did this was in fact a hard core addict in the past and had been sober for a few months. Nobody knew that he was in possession of the stuff which he just declared a day before the Sajja. Had this Sajja ceremony in the Retreat and you who brought this Retreat would not have been there, he would have relapsed and go on to using just as he used during his street life.
There were others who made vows according to their capacities in a very sincere manner which is very difficult because addicts and alcoholics make promises just to be broken. But, Sajja was a different one and all the participants felt a level of dedication to put forward their commitments in a compassionate way of true understanding.

The Sit and Share meetings brought about a sense of unity and the nerves to stay still. It also instilled a sense of discipline which we lack very much. But, the greatest achievement of this retreat is its basis which is grounded on the core philosophy of Buddhism.

The Rehab facility will use this treatment model which in my opinion is highly effective. Even though we used to have the N.A. and A.A. treatment model based on the 12 steps program, the success has been very less due to the twelve steps which our clients thinks that it is a Christian program. So, it has not really been accepted very well. At the mere mention of the program, they get dissuaded to follow the program.
Last but not the least, we have been very indebted to have you here and would request you to continue your relationship with our center. In fact, we are looking forward to having you here and conduct the retreat at the New Center. I was wanting to comment on the Retreat but i ended up writing a whole page, because RIGHT NOW IT IS LIKE THIS!