The one who helps us cross the ocean of suffering. 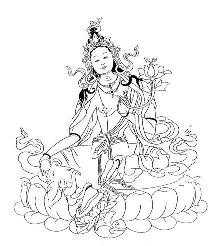 In 1997, in the early stages of Vince’s own recovery from alcohol dependency, he first came across Buddhism and in particular Green Tara as the ‘the one who enables living beings to cross the ocean of samsara (existence and suffering)’.  Green Tara (whose name means “star” or “she who ferries across”) is the female Bodhisattva of compassion.  In particular she represents compassion in action, since she’s usually depicted in the process of stepping from her lotus throne in order to help sentient beings. Her green colour and image has always stuck with me.  In fact, I have undertaken some basic instruction in TARA practice at the Kagyu Samye Ling Monastery and  Tibetan Centre in Scotland. 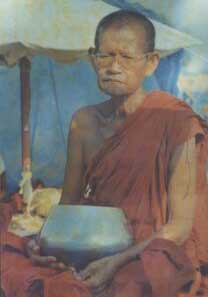 Mian Parnchand, like her nephews Chamroon and Charoen, shared links to traditional herbal medicine. She inherited the knowledge of herbal medicine treatment for various diseases from her ancestors. She was a Buddhist nun having ordained herself under a banana tree. Although there is no official Buddhist order of nuns, she had by her wisdom, devotion, sanctity and by all accounts prophetic powers earned her the deference and respect accorded to Buddhist monks and she was called LUANGPOR YAI or “Senior Father”. With her two nephews she established Thamkrabok Monastery in 1957. She was obviously in contact with high spiritual realms. Luangpor Charoen called her “a talking bible”, Luangpor Chamroon “a visionary”. Her influence on Thamkrabok as a monastery and on the treatment of drug addicts as a whole cannot be understated. She is the most venerated person in Thamkrabok Monastery. The Tara-like qualities of Luangpor Yai are unmistakable.

Vince lived in England for most of his life but he was actually born in Ireland.  The Hill of TARA is an ancient monument near Dublin in Ireland. This place has much spiritual and religious significance and was the home of the ancient High Kings of Ireland.  One of the features of this prehistoric and neolithic site is an underground cell called the “Mound of the Hostages” constructed about the time of the birth of Buddha. We often think of addicts as people being held hostage by their own addictions, unable to escape without paying a seemingly impossible ransom.  The colour green is closely associated with Ireland and with being Irish.The Hill of TARA, Ireland

As an acronym for Thamkrabok Assistance and Recovery Advice, TARA  Detox is perhaps a contrived name but it sounded and felt perfectly acceptable and quite suitable for the help I hoped to provide at that time.

Related Page:  Reasons NOT to go to Wat Thamkrabok

Related Page:  Sajja: A Practice for Transformation (Online talk and meditation with Q&A)

Related Page: The Way of the Vow: Sajja

>>>  Alternative view of  Sajja – Truth of Addiction & Commitment to Recovery